Another fantastic, busy week in Y5!

Friday was European Day of languages and Y5 learnt a little about Italy. We tried some local delicacies and came dressed in the colours of Italy. Some children took their costume to the next level!

We completed a great science investigation looking at how we can separate mixtures which got a little messy at times!

In English, we completed a shared write. The children worked hard creating ideas for a story in the style of Michael Morourgo. We can’t wait to write our own next week!

Mrs Hill has finished an imaginative, excellent history display for the Ancient Egyptians. Much better than anything Mr Bell could produce!

Another excellent week in Year Five complete!
In maths, we have been continuing our place value topic and are now looking at numbers into our millions.
In English, we’ve continued analysing stories written by Michael Morpurgo. We also completed an interesting independent write. Images below of some of our proud children showing their work, the whole class worked well and have completed a fascinating mystery write. We’ve also updated our wall display to include our grammar chants. We also continued reading Kensuke’s Kingdom and in related reading news, we managed to beat Year 6 in our word count challenge. Well done Y5!

We’ve continued our Ancient Egyptians topic by looking at how the Egyptians went about their everyday life. Another science investigation is also underway, focusing on the rate of evaporation and whether certain independent variables can change the rate. In RE, we looked at the Bible and how it’s been translated overtime. The children even got to listen to Mr Bell’s attempt to read a passage in many languages!
Excitingly, sports clubs have also returned with a number of Y5 children taking part.

Well done to Gabriella, Aiden and Esmee for being awarded this week’s STAR badges.

Week 1 complete! What a fantastic first full week it has been in Year Five. The children have settled fantastically and settled into their new year group, hitting the ground running.

In English, we have been looking at stories written by Michael Morpurgo (significant author) during our immerse stage. We have enjoyed reading some of his stories, including our new class reader Kensuke's Kingdom.

We have also been practising our grammar chants (video below). Hopefully it doesn't stick in your head as much as it has for our children and staff in the classroom!

In maths, we have been looking at place value and moved onto six-digit numbers. Our maths has also included a recap of the four operations in preparation for the year ahead.

We have started our topics in R.E (The Bible and why Christians read the bible), History (Ancient Egyptians), Art (Canopic jars), PSHE (Being me in my world), PE (invasion games) and also science (Chemicals and physical changes). Some pictures from our exciting science experiment looking at whether different substances were soluble or insoluble are included below.

Well done to Anais, Lucas and Ethan who were this week's STAR badge winners (I could have chosen any of the 30 children again!) 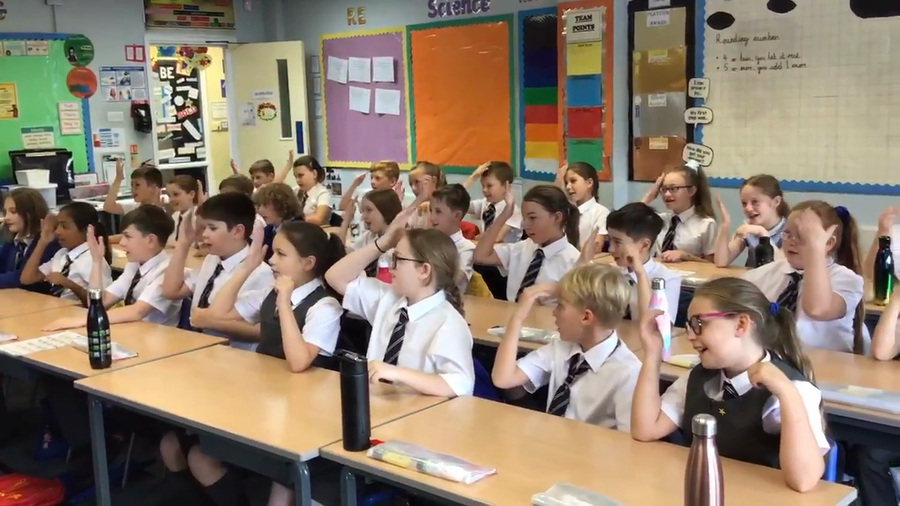