Information on Word Reading in Reception at Cronton C.E.

Just a few notes to explain how we teach word reading in Reception and what you might expect over the year.

We use a systematic phonological approach which is fun and fast moving.

Children learn quickly if there is movement involved and so each sound is accompanied by an action and a little rhyme or phrase. This multi sensory approach is an effective way of teaching. Your child will probably enjoy showing you the actions associated with the sound. We will be teaching four or five sounds each week until we have covered them all. New sounds will be added every day where possible. Please spend five minutes every day if possible practising these. This is a far better approach than half an hour, on one day a week. Vary the order, not always starting at the beginning, as some children learn them by rote and cannot recognise the individual sounds when given them in a different order!

Once we have mastered a few sounds we start to practise blending them to read words.

Each sound has a sound ‘button’. When we press it and make the sound we can put them together to make a word. 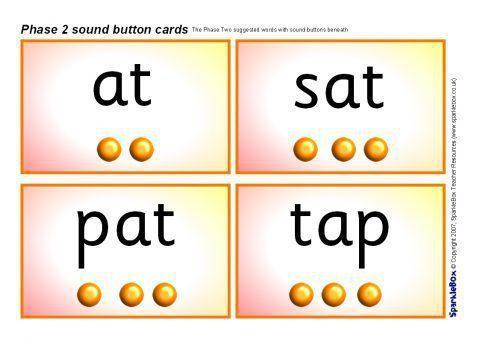 So in class we would say: s…a…t…sat

with the children saying the sound when I point to the letter.

We then get used to doing this without the picture of the buttons.

These are called decodable words.

When your child is ready to blend word lists will be sent home for the children to read using the same system as above. Again please could you help with this at home by spending some time working through these lists. It is important that letters should be referred to by their sounds and not their name (for example u as in up and not u as in unicorn).  Letter names will be introduced slightly later. Also at this early stage we do not place much importance on capital letters although children may encounter these when learning people’s names or for the start of a sentence in their books.  Again these will be covered later in the year.

There are about 44 different sounds (it is sometimes debateable) in the English language however, there only 26 letters in the alphabet. Sometimes two or three letters will be together to make one sound e.g. ar and igh. These are called digraphs and trigraphs.

For reading and writing the children need to be fluent at saying the sounds that go with the letters.  Initially only one way of writing each sound is taught  for example ‘ai ‘is taught first and then the alternatives of ay and a-e , will be introduced later on.

Although much of the English language is phonetic and able to be read and spelt by knowing these sounds, there are also some words that need to just be learnt by visual memory. We refer to these as tricky words and we encourage the children to think and blink in order to try to ‘capture’ the word. These words will also be sent home to be practised in a tricky word book. It is important that you continue to enforce that these words are called tricky words because the letters and sounds play tricks and not because they are hard to learn. It may be worth talking with your child about which letters are playing tricks. For example ‘you’ instead of what we would expect yoo- perhaps explain that the u is playing a trick.  Some children really like looking for the  tricks and it may reinforce their learning.  It is also useful to the children if you encourage them to look and say the first sound in the tricky words, as often this helps them to remember. Again please try these in a different order so the children actually recognise and read the words rather than learning the order of them.

The most common decodable and tricky words are placed into High Frequency word lists and are introduced at different phonic phases.